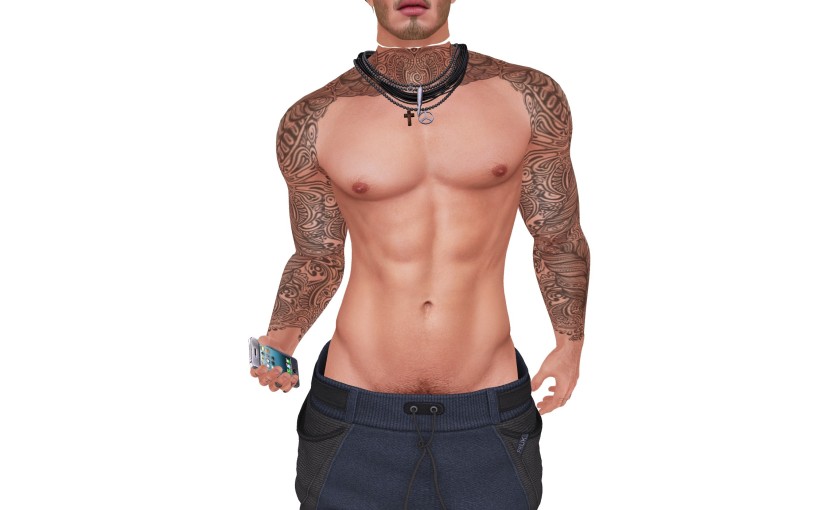 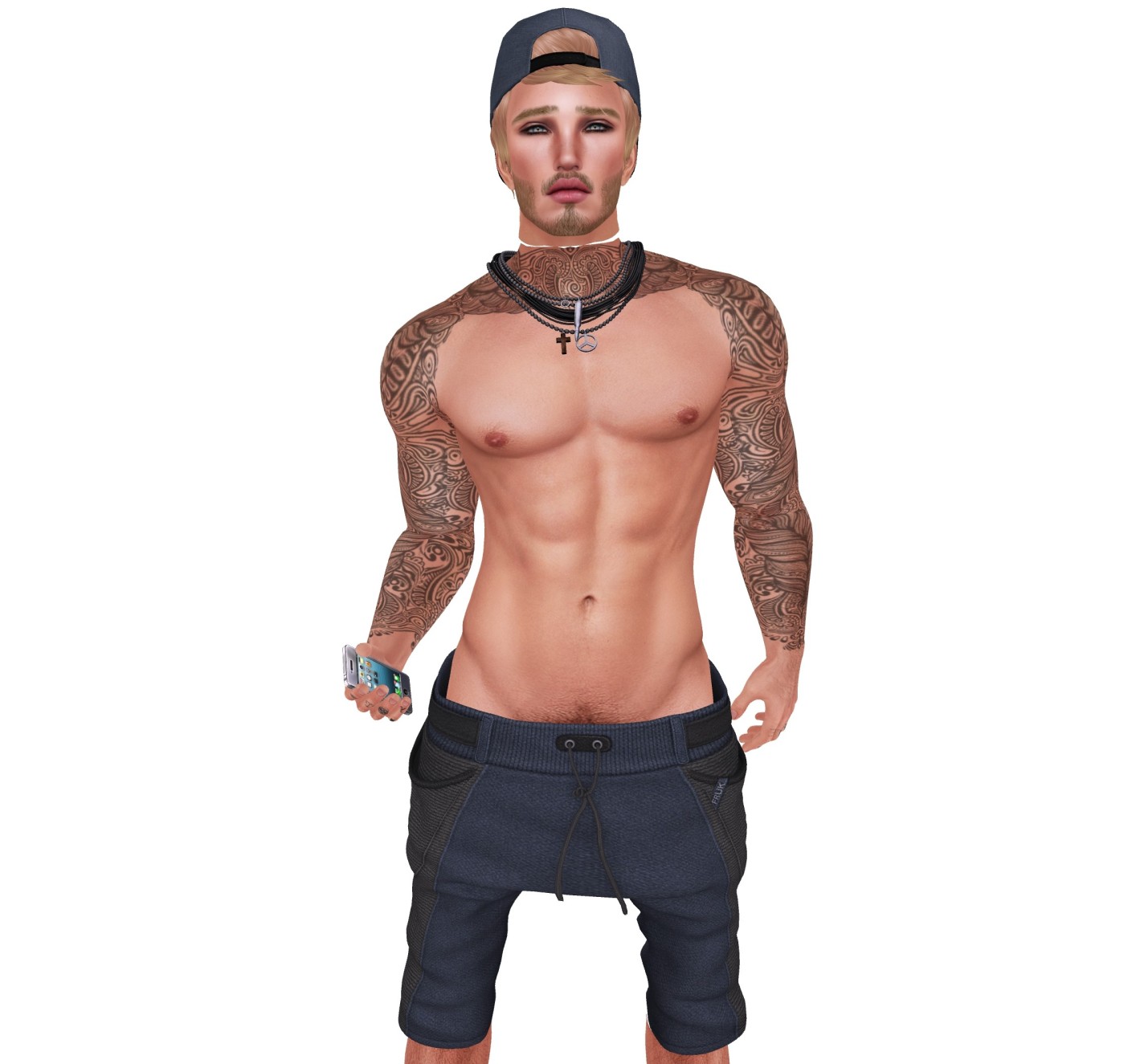 So, this was going to be a blog post about these absolutely ruddy amazing FRUK ‘Compound Shorts’ that I spotted on Flickr and just had to get for Jez because I knew they would look utterly brilliant (and I was right because they do).   Instead, it’s going to turn into a Kitty-rant. It’s kind of an odd Kitty rant too, because the products that I’m going to explode about (in a manner befitting a Sunday of course), are actually very good indeed.  But they’re also seriously over-priced with a purchasing and styling system that is beyond convoluted. Can you tell what it is yet?

However, before I go on my grumble journey let me tell you about what Jez is wearing because he does look rather grand.  I really do like the FRUK ‘Compound’ shorts because as you can see they’re well-shaped and styled but above all else feature a great texture choice that looks realistic and really suits them.  You know what I’m like when it comes to texture on items and how important it is to me? Well these shorts tick all my boxes; the fabric looks good and has a dense feeling to it.  The ribbing detail and the eyelets and cord at the front are pratical embellishments that look realistic and the name label is unobtrusive, giving an overall feeling that these are a quality pair of shorts indeed.  These aren’t a lightweight item at all and I’m incredibly impressed by them.  Jez and I will be keeping a close eye on FRUK!

I’m also becoming incredibly keen on another brand too, and that’s UNORTHODOX.  We first encountered them at THE MENS DEPT and again this month they’re taking part with another range of facial enhancements. The UNORTHODOX beard game is strong guys; they really do know how to create great facial hair and hairbases.  I’m especially taken with the brows this month; they’re a nice realistic shape with an urban twist. They’re not too manicured and look natural.  One of the problems I find with male brow stylings in-world is that they’re often a little too perfect and precise; the range from UNORTHODOX offers brows that look good but also look real too.

Jez is also wearing a fabulous hat and hair combo from ISON MEN available at THE MENS DEPT.  Ison is a brand that I personally adore and have done for a very long time; it’s not a brand however that Jez has much experience with so he was a tad dubious when I suggested he try their ‘ Nick’ hair and texture-change hat combo. He soon realised I was of course correct ( I always am in both lives!) and the hair/hat combo looks absolutely spot on worn with the previously mentioned UNORTHODOX facial hair stylings, and the beautiful ‘Martin’ skin from CLEF DE PEAU.  Jez looks very different to how he looked previously on these pages, and again that’s due to a mesh head.  But instead of the dark, brooding features of the GENESIS LABS ‘Alex’ Mesh-head, he looks more youthful (with vague hints of Stephen Amell) thanks to this skin and head combination.

Last but not least,  before I have a moan let me mention that the dinky wee KUNST phone Jez is carrying along with the rather fabulous necklace from are both gifts to celebrate the first anniversary of L’HOMME magazine, which is an absolute must-read for male avatar fashion ideas. Join their in-world group and you can visit a number of fantastic stores where you can pick up anniversary gifts, and with names such as KUNST and THE FORGE featured, along with MINA hair, HOORENBEEK and DEADWOOL included you know you’re in for a real treat! Check out the full listing in the magazine by clicking HERE.

I’ll get my credits out the way too before I start! Jez wears:

Right, onto my rant. Did you guess who I was referring too?

Yes folks, I’m talking about THE SHOPS. There’s been plenty of grumbling about the entire shops experience since it hit the grid months ago,  but that hasn’t stopped the brand from becoming an outstanding success. This is probably because the products they retail are undoubtedly excellent, despite the steep pricing and the purchasing and styling of them being an absolute palaver. Now, if you’ve purchased THE SHOPS products you’ll know what I’m referring to.  Granted, some of you may be scratching your heads completely befuddled and thinking “What is she whining about now?”,  but I’ve read enough comments  out there to know that I am not the only one who finds the whole THE SHOPS experience beyond frustrating. This has been brought on my the fact that he’s purchased a lovely mesh-body, and head, and as you can see has turned into something of a virtual anomaly.. 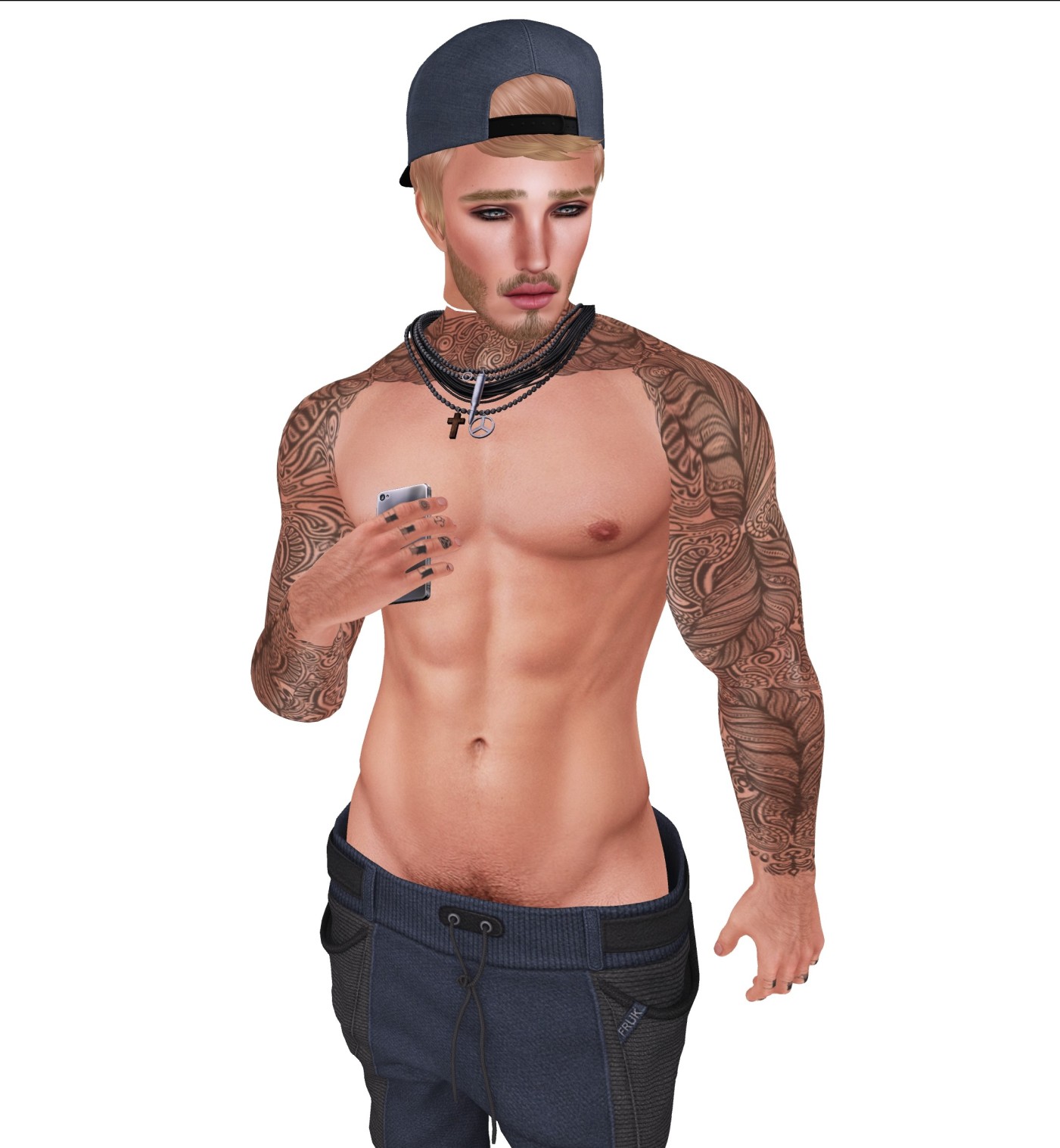 He’s got a disembodied head; which is different, and although I know anything goes in a virtual world, this wasn’t the look that I was going for when I styled him earlier today. To compound the matter, there aren’t any CSR’s available to help me fix this issue either. Which is beyond annoying. I’ve left my pictures as is because the quality of the products featured means I don’t need to post-process them, but it’s incredibly annoying to see that his mesh body and head don’t fit together like they’re supposed to, and that, along with some other issues, has spurred me on to this rant.

The problem is a simple one I think; by trying to make a premier product, therefore making it super-desirable and lusted after,  THE SHOPS have ‘thought outside of the box’ and designed an entire experience around their products.  So far, so good. Gimmicks can be a good thing. However, you don’t need to re-invent the wheel to make your mark, and you don’t anything further than a store in world with some displays to purchase from.  (There’s thinking outside the box, and there’s thinking so far outside it that you end up in a village just south of Dartmoor, where you stick to the paths at night, if you get my drift).  If it ain’t broke then don’t try to fix it, as the saying goes.  There’s plenty broken in Second Life that needs fixing but buying things isn’t one of them.  So I’m going to list my issues. Please feel free to add to them in the comments section, or tell me that I am being utterly incorrect in my ramblings. I’ll be pleased to hear your thoughts, but these are my negative experiences thus far:

As I mentioned before: the whole ‘THE SHOPS experience is just too much. It’s so different to the norm that it has to be experienced to be believed. It’s nice to be different, but turning the entire purchasing experience on its head when there was nothing wrong to begin with is just a step too far.

So, we’ve established the product is good, despite the fact that it’s over-priced and a virtual shopping nightmare of its own. Any other whines while we’re at it Kitty?

Well yes there are, and it brings me to point 6 listed above. As you can see from the pictures I’ve taken of Jez, there’s a gap between his mesh body and head. His body fat is set to 0 as the enclosed note-card specifies, but that hasn’t made a difference to his appearance at all, and oh look, it’s a weekend so I’ll have to NC a CSR and wait for them to get back to me..

See what I mean? Now I know what I’ve written here seems like a whole ream of complaints, but I wouldn’t;’t be writing all this if I didn’t think that THE SHOPS were offering us something pretty special in-world. Their product, when all the fancy packaging and HUD nonsense is taken away,  is an excellent one, as a whole gamut of images of beautifully styled bodies across Flickr and a myriad of menswear blogs will prove. But it could (nay, MUST) be better, and they could really set themselves apart from the rest of the pack if they moved to improve their offering. Strip all the unnecessary frustrations away and lower the pricing and they wouldn’t even notice a sales-dip because the product would be so popular.

Thinking ahead I actually believe that the answer lies elsewhere. Siddean Munro launched her SLink hands and feet and then her Physique body to rapturous applause and approval, and despite many other bodies being available it’s still an incredibly popular product. Why is that?

It’s because she understands that simplicity is key and she thinks product first, profit second.  To purchase, all you need to do is walk into Siddean’s store and buy the product and that’s it. Demoing the meshes is a breeze too, plus her items are priced incredibly reasonably for what they are, and they’re well-supported with regular updates, notecards and above all else clear, concise instructions. Siddean understands that communication is key. She also understands that not everyone in Second Life has limitless Lindens to spend, but they will spend them on her products if she makes them appealing and easy to use. (Also, she knows how to write FAQs)

Which makes me incredibly excited for the release of her male mesh body. I cannot wait to see how it will work on Jez’s avatar, and if we get some male mesh heads too  that will make me even happier. Especially if the ears don’t look like spoons.