And like most breedable releases, it wasn’t without its fair share of hiccups. Vendor faults aside, the Wildwoods launched and the vendor locations were, as you would expect, deluged. Many people had waited all day in chat, eagerly anticipating release, so when the stores were opened it was met with huge relief. The anticipation was huge and the crowds were massive and rightly so. But it never fails to amuse me how supposed adults can act like whiny children in group chat. Second Life really does bring out the dark side in some people.The beta gifts were exceptionally generous, and every single Wildwood pack has been packaged beautifully; so beautiful in fact that these are permanent additions to my Christmas collection in world.Chat is, as one would expect, VERY busy. So far it seems that the blue pelt has been the most common and like many others, I found myself a tad deluged with them. I’ve managed to swap a few around successfully, which I’m pleased about, and already there is a market for people wanting different starter coats. Not only that, but as we were informed during Beta, Wildwood have indeed included a few surprises such as different poses and animations. They’ve also totally re-modelled the food, as well as providing a vast array of new peripherals to boost your cat stats. It’s a great product, make no mistake.It’s interesting to note that I’ve been accused of bias by a poster in my comments section re:one of my previous Wildwood ramblings. At this point I want to state that I was a Beta tester for BOTH Krazy Kitties and Wildwoods (Not Brightpets, didn’t know about them until release day but then they did seem to come out of nowhere..)I have evaluated both products and for me, Wildwood fits my desired breedable profile to a ‘T’. Fact is, both Krazy Kitties and Brightpets are not what I am after, but that doesn’t mean that I am right about which breedable pet is *the* one to buy, and I don’t recommend that anyone else should take my word as gospel (Heaven bloody forbid!) and not have the nous to go and see for themselves exactly what they are all about. In fact, if you want a breedable cat, I’ll go so far as to make your job incredibly easy for you. Go along to Herdy’s where you can see Brightpets, Krazy Kitties AND Wildwoods all in one place, and make an informed decision as to which breedable cat to buy. There are plus points and minus points on every breed; for example Brightpets reputedly have masses of breedable traits, Krazy Kitties have multiple births, and so on. Plus you need to take into consideration that people enter the breedable game with different motives and breeding objectives. For me, I want to create a virtual cattery that represents that cats that I presently own in real life, as well as the beauties that I have loved and lost too. Wildwoods, with their fabulous textures and eye colours mean that I stand a much better chance of attaining that goal.I’ve got myself 8 breeding pairs and I can honestly say that I am genuinely delighted with the Wildwood product. It’s early days, and past experience with horses and bunnies suggests to me that there will be ups and downs along the way. I think these cats will flourish because of their features and the scope that they offer, and also because so many own cats in real life. I think when you already have a vested interest, you’re going to be passionate about a product that caters to that. I have no doubt that there will be JUST as much enthusiasm when the dogs are released, and the next breedable after that, and that…. Oh, and in case you weren’t aware, there’s going to be ANOTHER breedable cat release as well: 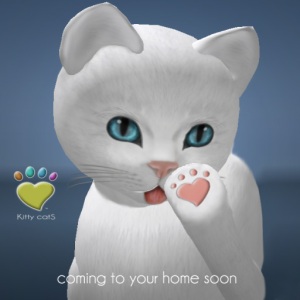 I can’t tell you much about these ‘Kitty Cats’ at all, other than a few pictures I’ve been sent, but they certainly look very cute from what I’ve seen; more kitten-ish in their aspect with their rounder faces.  Can the grid cope with FOUR breedable cat varieties? I seriously doubt it and I think we’ll see the grid dominated by perhaps two brands max.  What they will be remains to be seen…A final thought. I cannot bear immaturity in real life, let alone Second..can you? There’s plenty of scope in-world for different species of breedable pet, but someone really does have it in for the Wildwoods. I wonder who that could be? I’m not going to lose any sleep over it that’s for sure, but it’s been very amusing to me when reading my comments to see that they’ve originated from the same place. ( Note to a dear reader, when IP addresses point to the same location, changing your name doesn’t hide that fact….)

One thought on “The Wildwoods are here!”