What do you get if you cross a Capybara with Stitch from Walt Disney’s ‘Lilo and Stitch’ and mix in a pinch of cat, a sprinkle of fox and a dash of meerkat?

Some would say a genetic anomaly the kind of which would bring humanity to it’s knees..

I’ve been able to have a close-up look at these critters because they have gone on display to the Second Life public today to stir up interest and basically annoy all the other breedable creators out there.

You see, Meeroo aren’t like all the others. It’s not just that these are exotic, fantastical beasties, but also that the breedable program itself is very unlike those already out there on the grid. That’s because the emphasis is different; you don’t just breed Meeroo but you get the opportunity to gain bonuses, join a society and unlock features. This development is evidently engineered to create a lasting breedable product without the peaks and troughs of recent times, and may prove to be a real game-changer on the grid. If I was a breedable creator I’d be ever-so-slightly nervous about the implications that the Meeroo may bring!

But what do they actually look like? Well, don’t be put off by my previous description, they are actually extremely cute! In fact, I would go so far as to say I was surprised by them; they look good with a great body shape and fabulous coat texture, and the animations I witnessed were both solid and very endearing. My only criticism is, you guessed it, eyes. Eyes are a real bug-bear of mine, and like the Sunrise eyes on the Ozimals bunnies that I mentioned in my previous post, the eyes upon these Meeroo don’t have any central glints of light in their pupils, making them look, to me at least, ever so slightly dull. But that is merely my opinion; when I vocalised this in the vicinity of the Meeroo it was clear that not everyone in attendance shared my view, in fact the fabulous Sasy Scarborough pointed out that she thought they were lovely and that she could melt into them:) 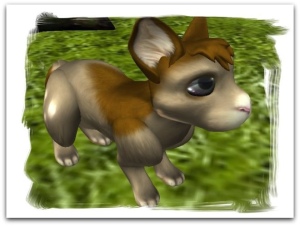 The picture at the top is an adult Meeroo, the one below is a baby.  The adults are actually rather surprisingly large, but the same prims as a Wildwood cat.  There are going to be tons of options that you can breed into these guys apparently, including different shaped heads as well as the more usual coat and eye colours, so that’s an interesting twist.Eye issue aside I’m very keen to see how the Meeroo develop. I don’t know when Beta launches, or if it is already in progress, but I do know that many people in-world are eagerly awaiting the arrival of these upon the grid, and if the preview is anything to go buy I think they will be extremely successful indeed.

If you’d like to learn more then check out the great post from Tracy Sparrowtree on Breedables Inc, that features tons of detail, some of the Meeroo backstory and more of the finer details about them.

One thought on “Meeting The Meeroo”