Being entertained at SL10b by Jahman Ochs.

There’s only ever going to be one tenth birthday for Second Life., and whatever happens to our virtual universein the future, we’ve reached an impressive milestone and it deserves to be celebrated.  Rest assured there are lots to see and do at the official celebration location, but most of all I suggest you use it as an opportunity to make new friends and MINGLE! Because that’s what SL is all about after all, being social.

But even in Second Life it’s not always easy to speak up, as ironic as that may seem. I spend most of my time alone, mooching around sims and just enjoying the metaverse. Yet social gatherings in the virtual world can be just as valid as the real one, if not more so. Let me tell you a story..

I was introduced to Second Life in late 2006 by a real life friend, and the first place I ever visited became my regular haunt, the ‘Three Lions’ pub, which I’ve spoken about lots on these pages.  I could have just lived out my virtual existence right there, hanging around with the chums I’d made, but as my confidence in my virtual environment grew I started to relish exploring the grid and seeking out new places and experiences.

In 2007 I went to an event in Second Life called ‘Secondfest’. It was a huge occasion, dressed up as a Glastonbury-style festival, but boasted backing from real life daily news publication ‘The Guardian’. They went the whole hog; covered it extensively in print and had a full itinery of live and recorded performances for people to enjoy, held in various arenas and on stages dotted around the Secondfest Island.

Looking back it was great fun. I spent the entire virtual weekend there, hanging out in the tent area, playing around in the portaloos, and dancing like a buffoon at the live music gigs. It was a fantastic opportunity to hear DJ’s dropping their beats in real life without the expense of travel or the risk of being caked in mud for an entire weekend ( I was wearing virtual wellies though!)

At one of the gigs I encountered a DJ, DJ Jenns. He was a brash, rowdy, opinionated Scot who really knew how to mix and basically played the greatest set I had ever heard in my life (up until that point of course, it was 5 years ago!) Not only that, whilst I was moshing around like a buffoon (Funny how I can’t dance elegantly in either the virtual or the real world!) I bumped into Amanda Shinji. And I bumped into her more than once over the weekend..and you know what? She’s been my bestie ever since. It’s hard to believe that I’ve been friends with her for 5 years now and we’ve never spoken a word in real life to each other, but it doesn’t matter. Our friendship is as valid in both worlds, and I love her to bits.

We live as our avatars in a unique, dynamic environment  that is too often seen as a curse, rather than a blessing. Media vilification has made Second Life seem like a seedy dwelling place when that isn’t the case at all (unless that’s what you want it to be, of course!) Leave all that virtual baggage behind you and have FUN.

I want you to have the time of your Second Life at SL10b and revel in the nostalgia and the bonkers madness that’s on display, but most of all cultivate new friendships that will carry the spirit of Second Life with you well beyond this week of celebration.

In fact, I  challenge you to do it!  Check the schedule, for there are countless activities happening every single day, and go out there and go and enjoy yourself. Dance around like a loon, take in a lecture or just strike up a conversation as you wander around.   We’re a community, and we have strength in numbers, but on a personal level  you can find so much love, help and support from just a few pixels on a computer screen, connected by networks and wires to someone on the other side of the world.  It’s almost bonkers really.

I’m still friends with Amanda of course, but also DJ Jenns and some of the wonderful people that I met at the Three Lions pub. Not only that, many of them I now know in real life too (where would we be without Facebook, huh?)

What will your memories of SL10 be? I hope they’re happy ones that you will discuss for years to come with the friends that you make there… 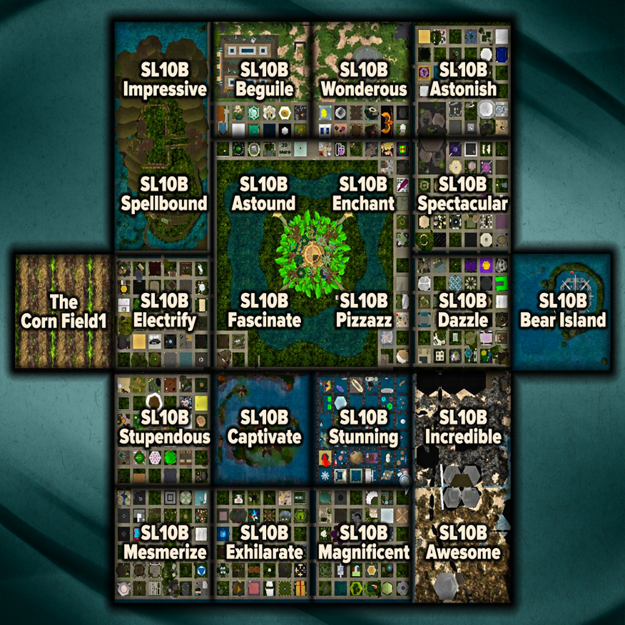 Here’s a list of destinations to get you started. ENJOY!