I’m actually thankful that beloved is made-up with cold, and that we had our doggy daughter in bed with us last night which resulted in me having an utterly shite night’s sleep. ( Sleep? HAH!)
Because if I hadn’t, I would have slept in until some really stupid hour and remained completely oblivious to the latest breedables to be released upon the grid….KRAZY KITTIES!

Yes, out of all the mammals that people have lusted after as pets, one of the big hitters has finally arrived. We all knew cats and dogs would be big, and judging by the crowds rushing to get their hands on the starter packs there’s LOTS of interest in the latest breedables to hit the grid. How big they’ll become remains to be seen but because this is a beta test there’s plenty of time for issues to be ironed out prior to a proper general release.

But back to the beginning; Altair pinged me in world and asked me if I was ready..for what I had no clue. I almost died when she told me the beta Kitties were almost upon us. She soon filled me in-join the Krazy Kitties group for L$100 ( a fee aimed at reducing alt accounts from logging in apparently) and we were off. As soon as the announcement hit that they’d been released, we began our attempts at TP’ing to the launch location. Just as with the horses, the crowds trying to get in to the sim were tremendous, and I resorted to using a low ARC avatar to assist my gaining access, which eventually proved worthwhile. The sim is pink, pretty and cat-shaped and the development team were assembled and waiting to assist the throngs. I had a slight issue where I didn’t receive my starter pack, but the staff were really helpful and sent one to me very quickly. Once received, I zoomed home and got to work…

You ‘release’ your kittens from the boxes that they arrive in, and you’re treated to the sight of an ickle pink kitten in a bundle sans stork awaiting birth. 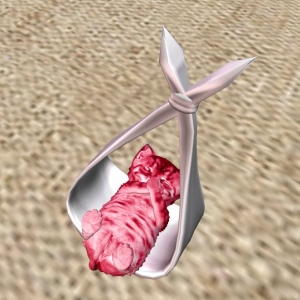 You click to wake up, and ‘birthing’ begins…and then you have your kitten! No hassle, really quick to develop and ever so cute.

The first thing that struck me was the superb anims..these are very realistic. The kittens run, scamper, roll around and do that “I’m gonna jump on your toes” bum-shuffle thing that real life kitties do. Amazeballs. Because these are betas they come in an array of odd (well, hideous) colours so we don’t get the full effect of them just yet, but physically they’re not bad looking wee critters ( Photo doesn’t do them justice I promise)  I still think the bunnies have the edge on the cuteness stakes, but there’s time for development in that area. 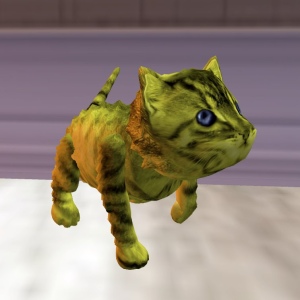 The kitties come with their own beds (Pink..’nuff said.) which you have to set as their homes, and you also rez a toy and milk for them to eat/drink. The kitties require interaction to thrive, recommendations are to manually put them down for a nap twice a day, as well as the automatic sleep that they have themselves. You can pet them and providing boosts such as catnip has an effect upon their breeding. Interestingly enough, like a cat in real life these Kits can have multiple babies at once, which makes them very interesting prospects. Even more interesting is the fact that you may encounter a stillborn kitten which can be restored back to life by the application of a medical kit. Of course, said kit costs Lindens, but this is a product after all and developers quite frankly want to make a dollar or two out of it, but restoration of the stillborn bundle is optional as far as I am aware. I don’t know if there’s a way of knowing what the stats are for the bundle before you birth it. If there is, then this would enable you to make a decision as to whether you restore the health or not..if there isn’t a way of seeing stats then I have a feeling they’ll make a mint out of medical kit sales! Perhaps that’s the idea? 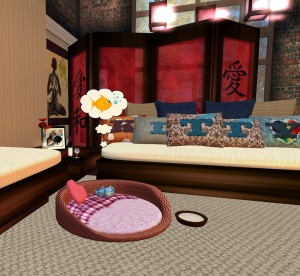 The kitties are a beta-product, which means certain features will probably change prior to their official release which is rumoured to be Christmas. The point of a beta is to put the product through as much stress as possible to see where potential issues may arise prior to official release; so far I’ve not experienced any major issues and my initial impressions are very good indeed. BUT it’s onlyay one. The kitties are adorable, have great animations and interaction and are the first breedables to my knowledge on the grid who actually get down and have a bit of rumpo to make babies with the animation for that particular action being actually rather cute ( I’m so glad they didn’t enable that aspect for the horses though…yeuccchh)
Breedables are big business in Second Life and apparently these kittens have been in development for over a year. I hope the hard work pays off; there have been huge changes in the market in recent weeks with Ozimals well and truly dropping the baton and the Amaretto horses taking over the number one breedable slot. It remains to be seen whether the Krazy Kitties will have the same impact but for now I’m keeping an open mind, enjoying these beta babies and looking forward to what the next few weeks will bring!