I’m going to take a break from Breedable drama, but focus on Breedable niceness for a change. As readers will know I’m a huge fan of the Wildwood Cats, in fact it’s fair to say that I am somewhat besotted with them. I always knew that when cats finally made Breedable status on the grid I’d be there like a shot, and I was. I took place in the Krazy Kitties beta, but they weren’t really what I was after. They didn’t have the coat colours that I wanted, because I want to replicate my real life cat collective in Second Life, and celebrate the cats that I love, and have lost in real life in the virtual world. I don’t see anything creepy in that; I know these cats aren’t real and of course they can’t replace my real life moggies, but I’m sure fellow enthsiasts will understand my motives. It’s sort of nice to know that in a virtual world the pet you have lost can have some sort of presence enabling them to continue in a fashion..unless recent events cause otherwise. ( But I said I wasn’t going to talk about that)

When the Wildwood pelt previews came out I was totally chuffed to pieces to see a bicolour black and white represented, and knew I would have to have one. You see, earlier this year I had my beloved black and white lad, Moth, put to rest after a long illness. As pet owners and carers it’s the hardest thing in the world to have to make the decision to end the life of your pet, but at the same time it is the ultimate kindness. 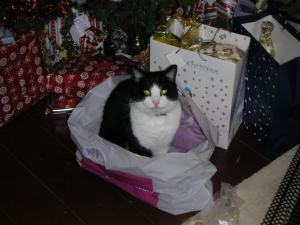 I grieved like all pet owners do, and I’m now in a place where I can happily look back at my time with him and smile because, well, Moth was a special cat indeed. He was, to be honest, the dumbest cat I have ever come across in my entire cat-owning life. I have *never* known a cat move so slowly or look so, well, totally vacant all the time. In fact, it was obvious to not just me, but to my other cats as well that Moth, well, he wasn’t all there. But they didn’t harrass him, nor make a fuss..He was a totally integrated member of the family and loved by us all. He had a purr like a Rolls Royce engine, and he was a very loving, if totally demented little lad. All my other cats would catch mice and birds on occasion, Moth didn’t do much of that himself, BUT I do recall one incident where I was in the kitchen and Moth came through the cat-flap mewling his head off..a very persistent call that clearly meant ‘Mum! Look What I’ve got!’ I expected my little chum to proudly deposit a mouse at my feet..but no, my clever wee man had found something even better.
A piece of broken polystyrene packagine.Even better than that; polystyrene is reknowned for static cling, and Moth (despite having a short coat) was a bit of a furry beast, so it was with some alarm that he realised he couldn’t present his polystyrene trophy to his mum, because it was stuck to him. Cue much mirth as I chased him around trying to remove it from his coat. Still a gift is a gift and I accepted it with gratitude. I like to think he was proud of himself in his own special way. Cue many years later, and we got our dog, Indy, and she’s fitted in with my five remaining cats brilliantly. Moth liked her very much, because she was very warm and snuggly, and most days I would find him cuddled up to her, especially as his life was coming to an end. ( You can see a video of both of them together by visiting: http://www.youtube.com/watch?v=WQdt5XRpZ1M)

Moth was not the brightest button in the box. But I adored him…just like I adore my Wildwood representation of him. Thanks then to Mika and Zilar, for enabling this little fantasy of mine because if it wasn’t for them, we wouldn’t have these glorious cats at all.

One thought on “A Wildwood Cat Called ‘Moth’…”