Seems Amaretto have decided it’s time for some serious spring-cleaning because they’ve launched an update with some pretty radical changes.

Not only have they announced the retirement of the Appaloosa and Walker breeds from starter packs, but they’ve also considerably changed the sculpts that shape the horses, meaning a huge difference in appearance from the original Amaretto style (more on that later).

Other updates include not being able to send a sick horse to Horse Haven (controversial that one methinks!) but a much cooler change that shows real consideration for the customer base is the fact that horses can now eat themselves out of being sick (starved). That means lots of lindens saved on sick kits if people have the patience to wait, and I commend them for implementing that change.

Because I don’t breed horses anymore, but still love them, I was really intrigued when my friend Vere pinged me to say a massive update had been released and would I like to go over to her land to see the changes. Vere’s a moderately successful breeder and has over sixty horses in her care. However, it was clear after starting the update that these changes were not only pretty substantial, but a potential game changer too….

For a start the horses seem to have lost the overall roundness that they once had. In fact, this is most extreme on the faces, where the once gentle curves have become replaced by a more angular aspect. There is more detail on the mane, this is seen to great effect in the upright mane which granted, looks much better. As does the tail, which has much more depth and detail than it did before. This is shown to great effect on long tails, although I didn’t see much change to the long mane which was disappointing. It would have been nice to see random curls or waves there. The eye textures and colours are slightly altered as well. Personally I think the eyes have lost their character and have become beady, a trait I observed and commented about when I first saw the Amaretto breedable dogs.. The colours and textures are tweaked somewhat as well. In some instances it works, in others I’m not so sure. For instance, teh Red Walkers I’m featuring in this post were a nice shade of red-brown, now they’re almost orange!

I know breedables develop as time goes on, I KNOW. I’ve been a breeder myself for long enough to realise that changes are required to stay ahead in the game. But this is a HUGE change, and I just don’t understand why there was a need to change the appearance of the horses to this extent. On some of the breeds, and this is of course my personal opinion, it’s rendered them almost characterless. I noted clumsy changes, for example the horns on the LE Christmas Reindeer Horse are now a bit of a mess, they weren’t that sparkling before but now they look like branches rather than antlers!

The only horse that I actually thought looked improved was a Black Arabian with violet eyes. I’m not all doom and gloom though: I really rate the changes to the hooves, these are a real improvement and have given them tons more depth and realism. 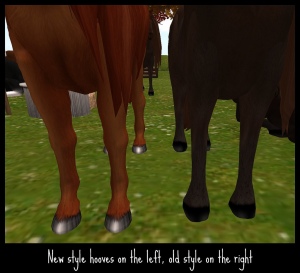 I think the changes to the manes and tails are overall a big improvement too, although I would have liked to have seen a few more tweaks with regards to the long manes. 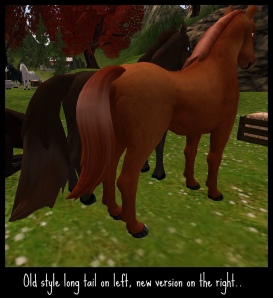 But on the whole? I’m not a huge fan of these new changes at all, although it would seem I’m in a minority because the Amaretto group was practically gushing with praise for the new sculpts.

I guess I’m old-skool, belonging to the ‘If it ain’t broke then don’t fix it’ school of thought. A few tweaks were undoubtedly necessary, but such an extensive over-haul is pushing it a tad too far. I really cannot see how this is an improvement on an already great product that looked pretty darn good to begin with anyway; and I really feel for Vere who is now in a real quandary. The changes to her favourite breed, the ones that she has avidly collected and lovingly bred, are now so substantial that it has seriously dented her enthusiasm and I am not just saying this but I’ve never known anyone so enthusiastic about the horses (and the bunnies) as Vere. It’s not only the Red Walkers that have lost their charm either; her other favourites, the Black/White Mustang now have a somewhat paler coat texture by comparison to what went before. For Vere, the appeal was the deep black of the coat, and now that has totally diminished.

Personally I’m glad that Trojan has retired because I couldn’t bear to have updated him and watch his appearance change so much. It’s the faces. They’re too angular and remind me of the Avebury White Horse in their appearance, ( I know I’m mad). But in all honesty I’d rather this appearance update was cut out of rock in the side of a hill than on the grid right now.

Will this impact Amaretto’s sales in a positive or negative way?  Too soon to tell I think, but it cannot hurt to inject new life into it by trying a radical approach. This could lead to an Ozimals-style resurgence of the product and I’d be more than happy to see that, but after this update I know for a fact that I won’t be returning to horse breeding.

What do you think about this update? Do you like the changes or are you unhappy with them? Feel free to leave your comments below!