The more photos that are added to The Arcade Flickr Group, the more I realise that the majority of my September will  be spent bouncing off sim walls wearing a low-lag avatar.  Dear me, are we in for an absolute TREAT!

I featured some, but absolutely not all, of the animal-themed items that are going to be available yesterday. Today I’ve spotted a few wearable’s that I want to share.  As I go to press more pictures  are being added to the group, so don’t  be under any impression  that what I’m posting will be the  entire selection because this round of The Arcade is going to be HUGE with even more vendors than usual. You may want to consider selling a kidney.

So, first of all, I want ALL OF THESE: 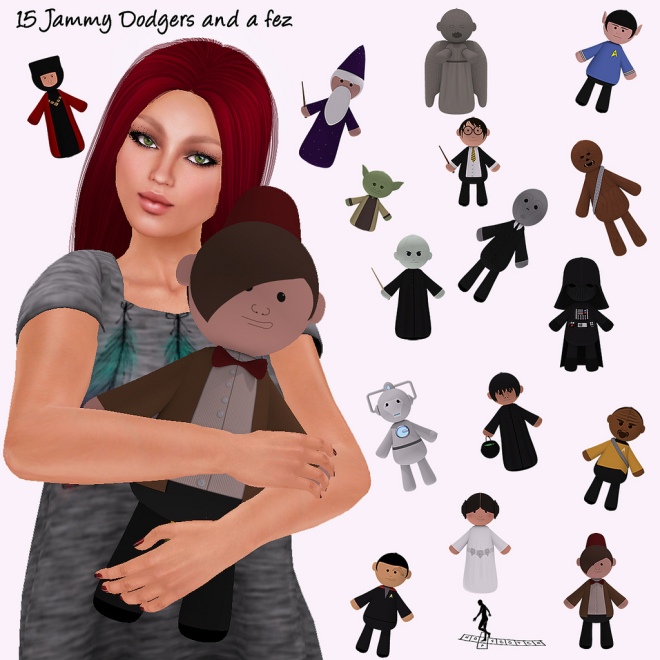 Aren’t these simply exquisite? These cuddly Sci-Fi characters from HOPSCOTCH are absolute must-haves for geeks like me and I love every single one of them. I’m of course drawn to the Doctor Who dolls (who would have thought that The Silence could be cute?), but I’m also really taken by the Star Trek dolls too.  I just started watching Star Trek TNG on Blu-ray, and watched a few episodes featuring Q (the wonderful John De Lancie, also featured in My Little Pony as the voice of ….) last week, so it’s cool to see that he’s included.  Of course the Star Wars dolls are pretty astonishing too, as are the Harry Potter characters (especially Dumbledore) so I will be guaranteed many a happy return on my Lindens when I use this machine.  I expect there will be queues and tantrums at this Gachapon!

Up next we have  a collection that is deceptively simple but incredibly well executed:

My name is Kitty, I love cats, and occasionally I like to wear cat-ears.

Therefore I want ALL OF THESE from AUXILIARY.  Especially the ‘Unicorn’ rare. ‘Nuff said!

In total contrast to the above is my next selection, which is a wearable nightmare! 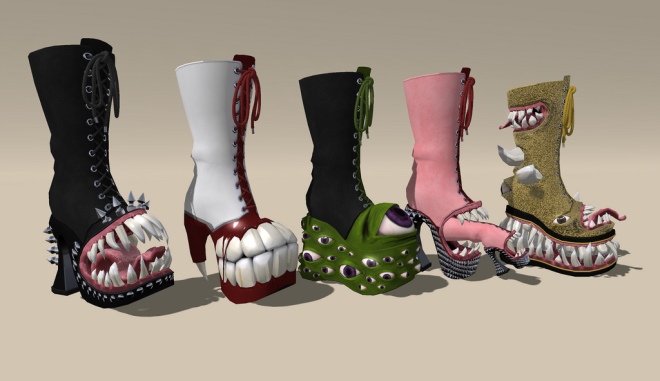 These CURIO OBSCURA boots are completely mental and are, quite frankly, the stuff of too much cheese before bedtime.   You’re looking at the Abomination Boots, and never has an item been so aptly titled in-world before! They look astonishing don’t they? Pandora Wrigglesworth has created some very special footwear here, perfect for stomping around the grid.   The five different styles that you see above are available in twenty different colours, just in time for Halloween. What’s your favourite? I really like the teeth and the eyeballs, and I can’t wait to see how people incorporate these boots into their outfits. These ‘abominations’ are definitely  the kind of imaginative awesomeness that Second Life should be applauded for.  Nice one Pandora! 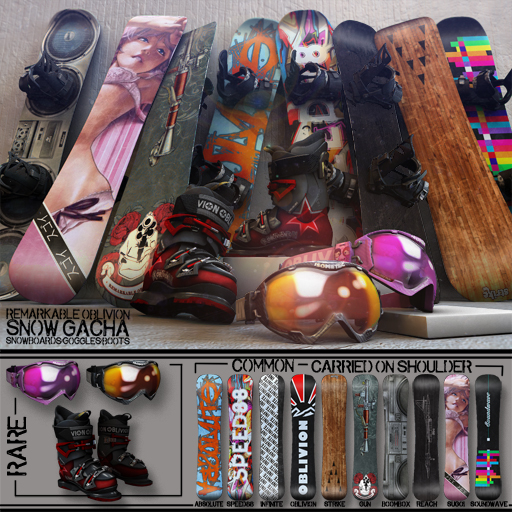 Last but not least are these amazing items that will be featured in the REMARKABLE OBLIVION Snow Gacha. Ten stupendous snowboards designed for carrying on your shoulder and looking cool can be made even more impressive if you are lucky enough to win the rares, which are goggles and snow boots.  I already know my mate Mands has got her eye on these, let’s hope she gets lucky and wins the entire set!

Have I wet your appetite for The Arcade? I should ruddy well hope so, I’m drooling here! Remember to check out the Flickr group for more hints at the treats yet to come, and come back tomorrow when I will be featuring some of the astounding furniture items that are up for grabs!