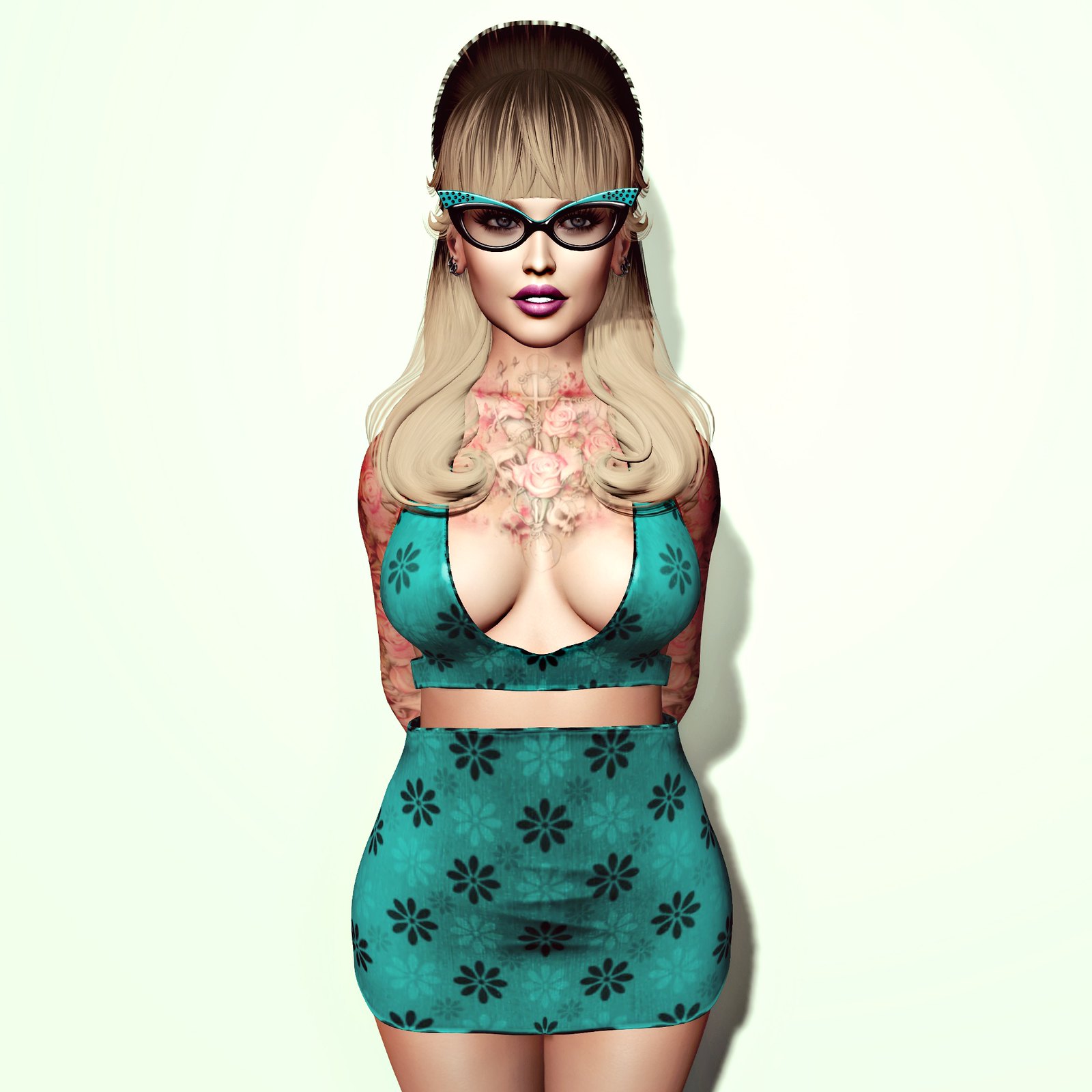 So the latest round of MESH BODY ADDICTS BI-MONTHLY is well and truly underway, and it’s full of wonderful treats and fantastic clothes, shoes, skins, manicures and everything you need to make your avatar look her very best.

For my first official post this round (although I did feature the tattoo in my last post as a sneak peek) I wanted to share this gorgeous ‘Lisa’ dress from LX.  I confess that this was the first thing I opened  purely because of the name (yes, it’s my RL name if you didn’t already know) so it was with some trepidation that I unwrapped the blogger package to reveal the goodness inside.  I wasn’t disappointed, this is a GREAT outfit and as you can see from my snap it lends itself to vintage styling incredibly well.

In fact, although this is a dress it really does evoke a two-piece bathing suit to my mind, can you see that too?  Not that it matters especially but it does make for a cracking virtual beachwear outfit.

As you can see I added the amazing APHORISM ‘Bella’ Sandals to this dress to create a sassy, summery look with an old-skool vibe.  It’s a cracking round of MESH BODY ADDICTS BI-MONTHLY, and I’ll be featuring further items on the blog this week.

APHORISM have released a couple of items that are just perfect for a vintage summer look. Of course, they work perfectly well when not given the vintage treatment, but as soon as I saw the  dress and the sandals I just knew what I needed to do with them!

What I did was add this fantastic Duffy-esque semi-updo from PINK HUSTLER  along with a pair of gloriously camp MAXI GOSSAMER shades to evoke a style that John Waters would be proud of.  Alas, I didn’t have any pink flamingoes.

The sundress is very pretty and I really like the double layer effect; the gauzy overlay is just short enough so that the hems of the original dress appear below it to provide the illusion of an edge.  The moulded cups to the main body of the dress also feature a contrast edge, and despite the apparent simplicity, there’s a lot of effort gone into making this frock. The main body of the dress is a more complicated looking texture than the gauze too, so when they’re combined it really feels like a substantial piece.

Of course, it works perfectly with the Bella heels.  These are a fantastic summer sandal; a classic style with  extra oomph by way of texture and finish. Zoom in, and you’ll find the chunky wedge heel coupled with  a choice of plain, rough and snakeskin leathers; perfect for pairing with not just dresses, but shorts and jeans too.  You’ll find the sun dress at THE SEASONS STORY, and the Bella Wedge Heels are available at the fantastic INDIE TEEPEE event.

Incidentally, it’s almost time for the MESH BODY ADDICTS BI-MONTHLY, and there are some wonderful items this round which I’ll be happily sharing with you on these pages. To begin I’m wearing a tattoo that I thought worked perfectly with the tones of my dress, it’s from CAROL G and I *really* like it! It’s called ‘Lovely Roses’ and they are precisely that.