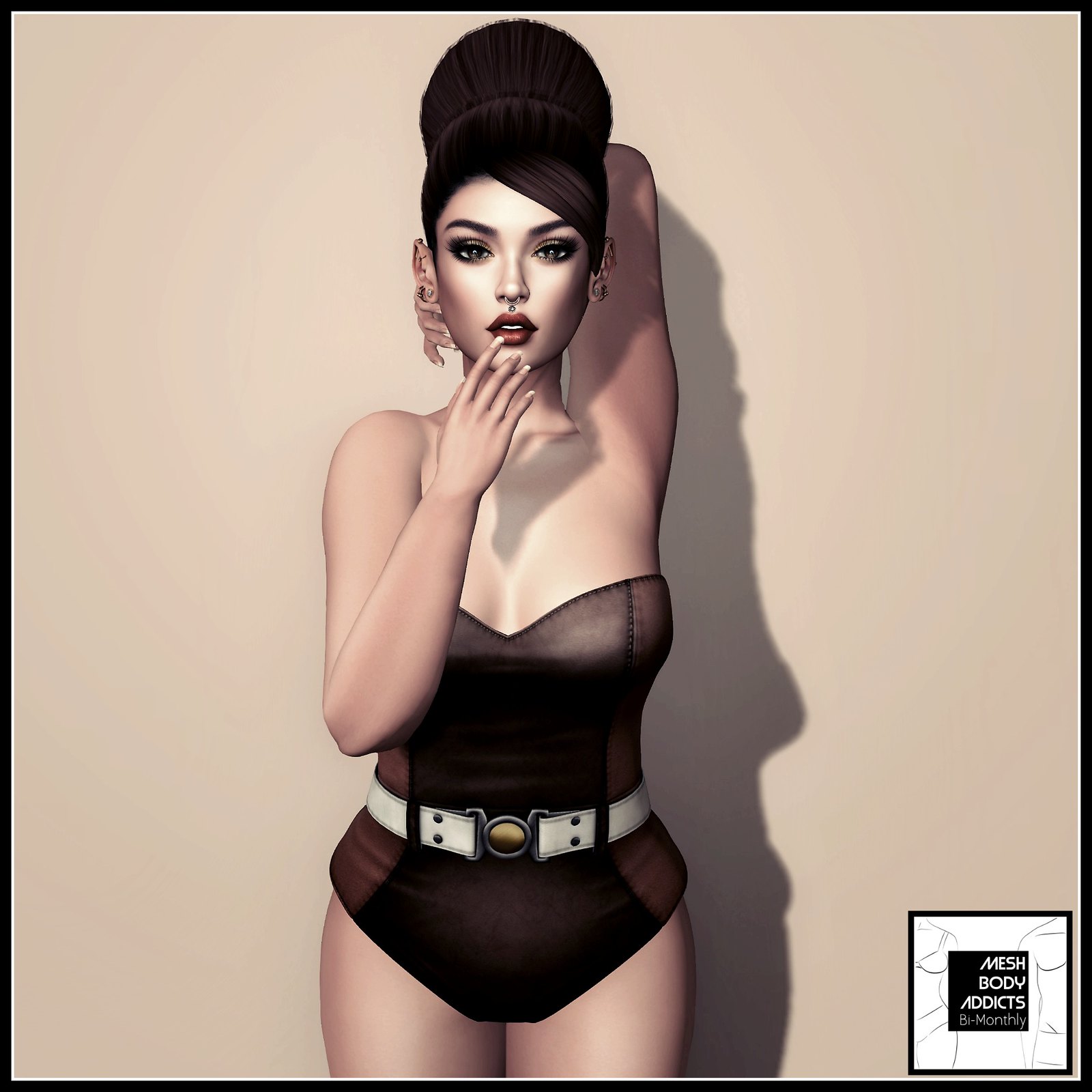 Can you believe it’s September already? *Gulp* The fruits are ripe on the boughs, the leaves are turning and there’s a bit of a nip in the air. Autumn is just around the corner and it’s my absolute favourite time of year; for one thing,  I’m a Virgo and it’s my birthday in September, and for another,  I simply adore the colours of this season.
Which means that this month’s round of the MESH BODY ADDICTS BI-MONTHLY should be filled to the brim with Falltastic delights to thrill me,  and to kick things off here’s the perfect leather bodysuit for the season.This is a very glamorous one piece affair from METHOD, featuring a contrast belt sitting perfectly upon a beautiful sculpt. The leather texture is well applied and really makes this feel like a quality item; add a statement updo (I’m wearing VANITY HAIR ‘Cocktails’ in brown here) and some towering heels and you’re all set for a night of high-class seduction at a club. 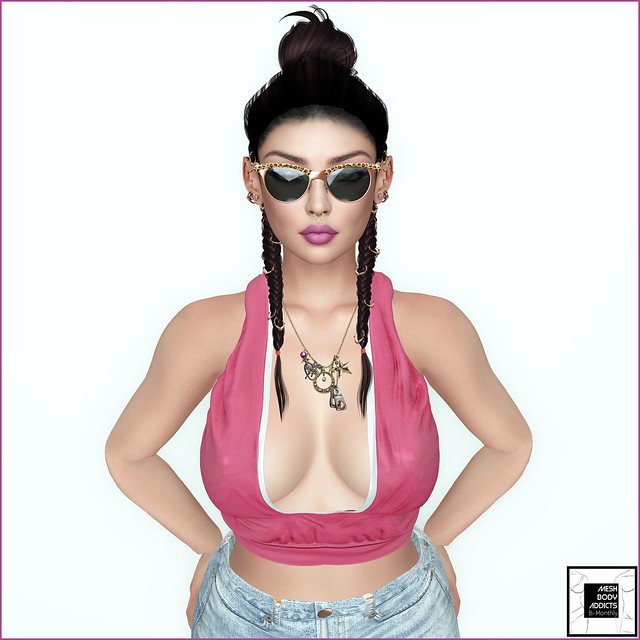 Something else that’s super fabulous this round is these ‘Joy’ halter tops by VINYL. They have a great velvet texture, can be found in 15 diff colors and are  HUD Operated. Each solid color comes with a zebra pattern too. We’re in for a cracking MESH BODY ADDICTS BI-MONTHLY this round, are you ready?

I’ve missed you guys too, but sometimes you need to take a break, and I’ve had a jolly good one.  I’ve been away from the blog for almost a month, and I confess I haven’t missed Second Life at all.

We’ve had a relatively decent summer here in deepest, darkest Derbyshire so instead of enjoying the fact that it never rains (unless you want it to) in Second Life, I’ve stepped out from behind my keyboard and  relished that fact that, just for a change, it actually hasn’t been raining too much in real life either!

In fact I’ve been out and about, catching Pokemon aplenty in the local park (Level 22 y’all) and not even thinking about SL.  That’s not to say I haven’t missed it because I have, but I haven’t felt the intense pressure to log-in at all this summer, other than to pay my rent.

I’ve often said it, but when Second Life becomes a chore it’s time to leave. You’d be surprised how many times I’ve seen Plurk friends who also happen to be bloggers say that they don’t want to log-in. Usually, this is because they’re over-stretched by blogging commitments and who can blame them with the amount of events and designers that we have in-world now?

This year, in particular,  I’ve seen many people leave; from store owners to sim owners who have just realised that Second Life, for them at least, has served the purpose it was meant to and it’s time for them to move on.  Let’s be realistic; Second Life has been around for a long time now and it’s only reasonable to expect that some people will feel that they’ve gone as far with it as they can and it’s time to switch to pastures new. Perhaps these people will be tempted to return in some way when Project Sansar hits the grid? Who knows, but I can understand their feelings and appreciate that sometimes as the virtual fixation starts to fade, the compulsion to log in starts to leave and real life takes over completely.

Leaving Second Life has never been an option for me. I genuinely do adore it way too much and have invested too much time and money into my virtual space to consider leaving permanently.  But a sanity break is often required, and in fact it’s something I recommend.  I have been through my total addiction phase, where you eat, sleep and breathe Second life and forget that you have an identity outside of the virtual world, but for some people the lines are so blurred that it’s hard to appreciate where the real life and virtual personalities separate, and that’s precisely why a break is so important, plus you come back with fresh eyes ready for a change; whether that’s a completely new avatar or even a sparkling new skybox; being refreshed and reinvigorated helps the Second Life adventure start over,  all shiny and new again.

I’m buzzing with new ideas about features and articles for my blog. I was writing down in my notebook last night ideas for themed postings in the lead up to Christmas, but before then we have my favourite time of year to be in SL, Halloween. I’m even considering a complete remodel of the blog (and if anyone reading can help me with that I’d really appreciate it!)

I confess that before my break I was starting to feel really fatigued by all the events that are overwhelming the grid and an element of ‘sameness’ was starting to creep in.  I was starting to see the same kinds of  clothes,  hairstyles and furnishings everywhere I looked and it wasn’t making me feel inspired enough to even consider putting pen to paper, let alone log-in.  Then, of course, there  was the whole sorry saga regarding the Oculus Rift viewer, or lack of it.  If you recall I was aghast that there was no viewer, and after my post went viral Linden Lab finally released one that was absolutely appalling and unusable, and unsurprisingly no sooner had it been released then it was withdrawn. This all left me feeling very disillusioned and I needed my time out.Now after my break  I’m back to my favourite feeling of all; that eager anticipation that builds up during the afternoon before I leave work.  I arrive home, get changed and pour a glass of wine before I settle down at my PC and log-in..

It’s been a great summer, but it’s so good to be back, and I’m straight back into it with some items from *gulp* the FETISH FAIR 2016, from WE DO SL. It’s a professionally styled and easy to navigate occasion and is rather more focused towards elegant kink than sleaze, and you’ll find a wonderful array of wearables of all kinds that fit the fetish theme.  Of course, skins are going to be a huge deal at an event like this and AMARA BEAUTY have provided a duo of absolutely top notch skins at this event.  In the snap above I’m sporting the AMARA BEAUTY ‘Kandi’ skin in Ivory. I’ve added a layer of glorious light fuschia lipstick from the accompanying lip palette along with adding lashes and eyeliner (that is practically a spot-on match to the lips) from EUPHORIC @ the latest round of COSMOPOLITAN. To finish, I’m wearing my favourite pierced ears and hairbase from L’ETRE, along with a septum piercing by  MONS and of course I rarely wear any eyes unless they’re from IKON.  My hair is by BESOM, and my jewellery is a fantastic choker by MINIMAL.  I’ll be sharing some more images from FETISH FAIR 2016 over the next few days..

Getting pretty Kitty-desperate here, just what is a girl to do? I need an EPIC outfit for tonight! Time to get summoning up some serious inspiration.  Hang on, I need to look good to do that as well! GAH! OK, I’m going to throw on an old favourite skin from NAR MATTARU and some cracking eyeliner from MONS.  I’ll add the amazing ‘Martia’ dress by FISHY STRAWBERRY in what else but a demonic red, and I’ll add those Doutzen boots from ILLI, both from THE MESH BODY ADDICTS fair.  To finish an old fave hairstyle of mine, ‘Octavia’ by BURLEY and it’s time to summon those spirits…

Sometimes writing a blogpost is a doddle, other times it can be really hard. Occasionally I’ll put an outfit together that in my head works beautifully, but on the page..urgh. In truth it’s often the case that the really simple looks turn out to be the best, and that is definitely the case here. I love the way this look turned out: Yes, it’s another one featuring a Witchy theme but hey, it is the season after all!

My look takes its cue from the cracking jersey I’m sporting from MUKA at THE SEASONS STORY (an absolute must visit guys, I kid you not!)  and is further enhanced by this absolutely banging hat that I won in a Gacha machine at REMARKABLE OBLIVION. It’s well worth your time dropping by the store and throwing some Lindens at the machine to end up with a bonnet that looks radically different to your usual pointy black hat. Last but not least I decided to add a co-ordinating lipstick layer from ADORED, one of my absolute favourite cosmetic brands in-world.  You’ll find some cracking eye make-ups and lipstick layers there for other brands of mesh-mush, not just the PXL SWEET LIPS that I myself covet..which if you replace the ‘t’ with an ‘n’ turns into a VERY Witchy word indeed! HUZZAH!

STOP PRESS: MONS have a 50% off sale! DO NOT MISS THIS! (Some of my best make-ups are from there! CLICK HERE TO VISIT