Can you believe that this dress is a freebie from the COCO UPDATE GROUP? It’s *perfect* for wearing with some boots and crunching through some leaves. It’s got an open back which looks very on trend, albeit a tad cold for the change in the season. There’s an entire wall jam-packed with freebies at COCO, so it’s definitely worth joining the group to check them all out.

Yup, it’s time to get your jumpers out of the cupboard folks, because Autumn is fast approaching so it’s time to get cuddled up wearing your favourite sweater.  This one is already a treasured item of mine, it is just scrumptious! It’s from COCO @ FAMESHED and the texture and style of it are mouthwateringly good.  I love the fact that it’s tucked in at the front too, it looks very realistic indeed.  This is another of those times where I’m drooling after something in Second Life.  I’ve been looking for a jumper just like this one in real life and I cannot find it, ARGHHH!

To finish this look I’m sporting hair by FOXY and I’m still wearing my ‘Skin Of The Week-Blair’ because frankly I love it and don’t want to take it off! My cosmetic layers were a find from ANYBODY. Morgana Hilra wrote about this amazing palette from SHINY STUFFS at the event and she was right, it’s fantastic!

I’m really rocking the vintage feel in this snap.  I wanted a less formal look than my beehive and frock which I posted previously, so opted for an old pair of denims, an on-trend tied-tee ( have you seen how many items you can get in world at the moment that are tied? Who would have thought a knot could make such a difference!) and an updo that really gave off the vintage vibe.  The bandana around this style makes it feel less formal than your standard headwear, but it’s the combination of these fantastic shades and heels from GLAMISTRY that really take this look outta time!

The sunglasses are classic styling- a thick rim with metal details to the tips of the frame and the sides. They’re easy to change via HUD, and rather than use them as sunglasses I opted to change the lenses to a totally transparent look so that I have the perfect everyday spectacles to match my outfit.  (Also it costs a mere L$247 for a pack of twelve essential colours!! BARGAIN!)

My heels are really rather special; these are the GLAMISTRY ‘Ramonda’ pumps and the animal print I chose to wear really pushes them back  into the decade of  Rock ‘n’ Roll but with a thoroughly modern twist.  Guys, these are well-worth a close-up look.  For a start the texture is incredible, a brushed fur effect to the animal print is juxtaposed against a pin-sharp heel and a metal stripe to the rear of the show and the front.  Like all GLAMISTRY footwear you have great options here to change various elements of the shoe, so because the majority of my jewellery on this look is silver I opted for that choice in my footwear too.

The look is decades fresh and incredibly wearable, and I got complimented upon it at SL13B, where I was due to contribute to the latest DRAX FILES RADIO HOUR broadcast.  Alas, as is my luck, I had a massive hardware failure as I took my seat upon the stage which meant I couldn’t contribute, and I sloped off with very wounded Kitty pride.  Still, even though I was silent I looked bloody hot, even if I say so myself!

Interested in this look? Here are the details and as always, happy shopping! 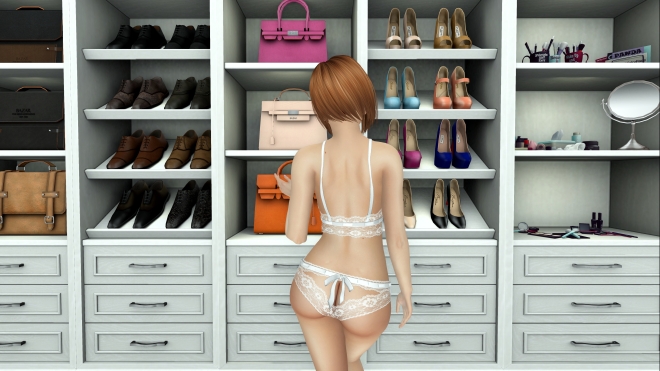 What do you like to do on a Sunday?  I like to mooch about a bit, something that you can do incredibly well in Second Life. So mooching is exactly what I’ve been doing..mooching about in my apartment, bemoaning that I have *nothing* to wear (much to Jez’s disgust) which is clearly not true because I hit SHINY SHABBY with gusto yesterday and found some absolutely lovely stuff!First of all,  check out my underwear. Isn’t it pretty? It’s by the always-awesome DEAD DOLLZ and it’s called called ‘Gwen’ and is available in five colour options. Unusually for me (as I normally go straight for red) I opted for the plain white version.  It’s so darn pretty! This little lace combination looks butter wouldn’t melt but don’t be fooled; there are cutaway pieces for easy access to the, erm,  important bits.  I think it’s absolutely mind-blowing; it ticks all my boxes for being something absolutely beautiful to wear and textured to perfection, yet it has just enough of an edge to make it incredibly naughty too. The ribbon detail at the back over your bum  is just to die for. It’s so simple yet so effective and enticing and for most of the morning I’ve just been looking admiringly at myself in this and thinking, oh yes. YES. I’m sure when Jez has stopped being cross with me he’ll feel the same way..

..or perhaps not. He’s such a grump! Actually, he really should stop being cross with me because courtesy of Ria Bazar I’ve FINALLY got organised! Well, OK, there are still some clothes strewn across the floor but not many because LOOK! I finally have the built-in wardrobes that I’ve always longed for..HUZZAHHH!In all seriousness, I’ve long coveted a closet. My current residence of choice doesn’t allow for a big walk-in wardrobe, so BAZAR‘s latest release for the RFL HOME & GARDEN FAIR 2016 , the ‘Glam Closet’, is just what I need; being both modular and versatile. Each piece can be arranged how you see fit with male and female design options available. To reflect the fact that I live with Jez I opted to mix elements of both the male and female sets into my build, so there are my bags and shoes on display, along with his suits and ties. If you have more space to play with you can really go to town with this set; Ria has thoughtfully included corner pieces to allow for perfect fitting around your space and there are blank versions of the units so all those little pieces you collect from Gachas that would look perfect in this kind of setting can finally find a home! (If you look towards the far right of the pic above you’ll see a collection of some of my gacha make-up winnings..huzzah for organisation!) 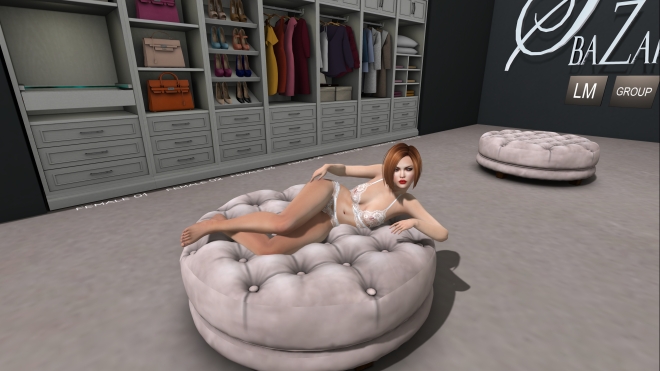 The pic above was taken at RFL so you can see a bit more of the available options. Some of the  hanging clothing items that you can see above have been recoloured to suit personal taste, and the actual build is available in a white or textured wood finish. I’ve opted for white because it fits perfectly into the overall ambiance of my apartment and I like the way that the colours of the bags and shoes pop against the white background. There are a couple of additional elements available too; a large ottoman that I’m lounging on in the snap above, featuring male, female and couple poses that really adds a luxurious polish to any dressing room. It’s colour change too; there’s a velvet beige (seen above) blue leather (uber masculine that one!) and a warm, brown leather (my personal preference, see pic #2). You can also decorate your space with a female jewellery box and a male watch collection that really make a statement as well. 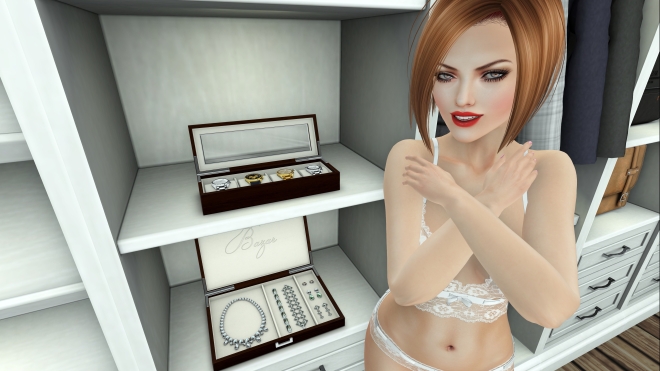 Last but not least a shout out to this glorious style from ENTWINED @ Shiny Shabby called ‘Alexis’.  I’ve opted for the light browns selection and I love the cut. Bobs make me a very happy kitty indeed and I think this one looks puurrffeeecccttt! Incidentally, it’s Shiny Shabby’s  birthday so there are absolutely TONS of freebies up for grabs as well as exemplary shopping. Of course, that makes it an absolute nightmare to get into, but I’ve managed a quick hit and I found these fantastic ‘Boyfriend Jeans’ from COCO which I teamed with a free bag by  N-UNO  and also a tribal necklace  from YASUM to complete a look that’s perfect for Sunday shopping. Which it seems I’ll be doing on my own because the boyfriend got fed up of waiting…

Anyway, TL;DR version, go to RFL and buy these amazing ‘Glam Closets’ for yourself, and then once you’ve done that try and get into Shiny Shabby to buy this lovely lingerie and hair and pick up all the presents (so that you can take up all the room in your new closets with them!)