I’m really rocking the vintage feel in this snap.  I wanted a less formal look than my beehive and frock which I posted previously, so opted for an old pair of denims, an on-trend tied-tee ( have you seen how many items you can get in world at the moment that are tied? Who would have thought a knot could make such a difference!) and an updo that really gave off the vintage vibe.  The bandana around this style makes it feel less formal than your standard headwear, but it’s the combination of these fantastic shades and heels from GLAMISTRY that really take this look outta time!

The sunglasses are classic styling- a thick rim with metal details to the tips of the frame and the sides. They’re easy to change via HUD, and rather than use them as sunglasses I opted to change the lenses to a totally transparent look so that I have the perfect everyday spectacles to match my outfit.  (Also it costs a mere L$247 for a pack of twelve essential colours!! BARGAIN!)

My heels are really rather special; these are the GLAMISTRY ‘Ramonda’ pumps and the animal print I chose to wear really pushes them back  into the decade of  Rock ‘n’ Roll but with a thoroughly modern twist.  Guys, these are well-worth a close-up look.  For a start the texture is incredible, a brushed fur effect to the animal print is juxtaposed against a pin-sharp heel and a metal stripe to the rear of the show and the front.  Like all GLAMISTRY footwear you have great options here to change various elements of the shoe, so because the majority of my jewellery on this look is silver I opted for that choice in my footwear too.

The look is decades fresh and incredibly wearable, and I got complimented upon it at SL13B, where I was due to contribute to the latest DRAX FILES RADIO HOUR broadcast.  Alas, as is my luck, I had a massive hardware failure as I took my seat upon the stage which meant I couldn’t contribute, and I sloped off with very wounded Kitty pride.  Still, even though I was silent I looked bloody hot, even if I say so myself!

Interested in this look? Here are the details and as always, happy shopping!

Feast your eyes on this bare-faced beauty! You’re gazing upon the gorgeous ‘Kallie’ from AMARA BEAUTY (formerly known as ZOUL CREATIONS) and as you can see she is absolutely stunning.  Shantia Soulstar has embraced the challenge that mesh heads provide for skin creators, and she hasn’t let us down.  She has created two beautiful mesh head appliers, both available at SKIN FAIR 2016, for LELUTKA and CATWA mesh heads. In this picture,  I’m wearing the LELUTKA mesh head applier on my ‘Stella’ mesh head, and frankly, she’s a revelation.

Shantia has been creating skins for mesh bodies for a while now so has gathered some valuable skin-making experience and she never disappoints when it comes to details. Every anatomical detail is present and correct and beautifully applied.  The same skill that she’s honed for her base skins now applies to her mesh head creations too, as I hope this picture clearly demonstrates. Guys,  this is a seriously breathtaking face.

The thing that ALWAYS gets me about Shantia’s skins are her brows; in my opinion she creates the best eyebrows in SECOND LIFE.  As you can see they arch perfectly and are just the right shape that frames, rather than overpowers, the face.  Cheek contour is always subtle but well applied, and as a foundation for mesh-head makeups ‘Kallie’ proves a worthy ally.  In fact as a bare canvas, even with the limitations that mesh heads currently provide, you can create some beautiful looks with ‘Kallie’ that will make your avatar look unique.

It’s incredibly gratifying for me as a blogger to see a skin creator that you admire continually develop.  I first started wearing Shantia’s skins (back when they were ZOUL CREATIONS) in 2014.  That’s not that long ago, but she’s clearly advanced as a skin artist and has a fantastic portfolio which I hope that she is proud of, because each one of her skins are incredibly wearable still.

Personally,  I believe AMARA BEAUTY will be one of the success stories of SKIN FAIR 2016.  I really hope so, not just because Shantia deserves her success and has worked hard for it, but because it’s high time this range of skins got the full recognition that it deserves.

(A quick shout out to ARISE who are also exhibiting at SKIN FAIR 2016, for this stunning under-bust tattoo that I’m sporting.  It’s called ‘Lisa’, so how could I resist? <giggle> (Yes, that’s my real name, hence I just had to have it!) I really love it actually; I do enjoy wearing tattoos in-world but sometimes I prefer something a little more understated rather than an over-the-top number, and this perfectly fits the bill.  I’m a huge fan of  ARISE and I wasn’t disappointed by their range of body enhancements on show at SKIN FAIR 2016.  I don’t think you will be either!)

A final word also for this pose that really caught my eye at POSE FAIR 2016 earlier this evening.  I’ve had a very brief shop there and found a couple of tasty poses that I’ll  be using in my blog posts over the next few days, but this one in particular, the snappily titled (ahem!) ‘Headshot F #3’ from BLACK TULIP really caught my eye.  It’s a real asset to a blogger to have an unusual  way to frame a head-shot, and this pose has a real couture-like feel to it, if you get my drift.  It feels like a pose that a model would strike on the pages of ‘Vogue’ or some other high-fashion magazine. It’s rather striking and very effective for pictures where the focus isn’t on clothing or hair, and one that I think I’ll get a lot of use out of!

Another day, another Witchy look inspired by this fabulous ERRATIC ‘Mia’ dress from the MBA BI-MONTHLY EVENT. It’s the red version I’m sporting this time, along with a fabulous REMARKABLE OBLIVION hat, won from one of the Gacha machines in their store. You know, these hats really do take some beating. They’re probably the most detailed witch/sorcerer style bonnets on the grid when it comes to design and colour, and because they’re so well made they really do make a nice alternative to the regular black pointy number that is currently being sported here, there and everywhere. Dare to be different folks! I’m still wearing the ILLI ‘Doutzen’ boots; they’re just a sensation and this time I’m sporting a nice brown texture to coordinate beautifully with my frock.
My hairstyle is from LITTLE BONES at N21.  What can I say about LITTLE BONES hair that I haven’t already said in many a blog post on these pages?  Not much to be fair.
The styles are always sensational and I’ve completely converted to their long-hair ways. One thing I particularly like about this style is the way that the back has been rendered, there is just as much attention paid to the tendrils and locks that fall against you as there is attention paid to the front. I’ve got some snaps that will show you what I mean coming up in a few posts time, so watch this space. Naturally I’m still sporting my current fave skin, ‘Becca’ from ZOUL CREATIONS because why would I take something so awesome off? I’ve rummaged in my inventory too to find an an old favourite necklace of mine, ‘Eerie’ by CAE that I blogged about extensively HERE, all the way back in 2013! It hasn’t dated at all and for me will be getting a lot of wear during Halloween due to the myriad of charms in the HUD. It’s still available so be sure to indulge! Oh, and last but not least, check out my eyeballs! I forgot that I had these IKON ‘Hope’ eyes in Crimson until yesterday but what a fabulous find for me at this time of year.  They manage to be completely devilish yet elegant at the same time; I’ll be having LOTS of fun with these, that’s for sure! 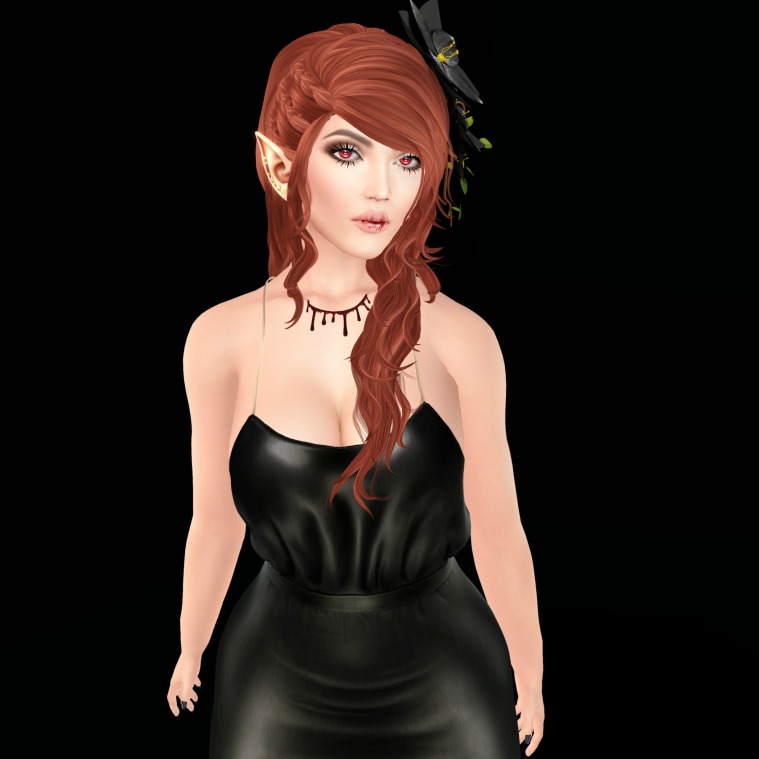 If you have a group slot free it is well worth your time to join THE FANTASY COLLECTIVE and swoop on down to see what wonderfulness  awaits you at this month’s round.  Not only will you discover some suitably scary items, you’ll also be able to indulge on some rather cracking freebies.  Each designer in attendance has placed a stonking great big pumpkin alongside their stand, and it’s filled with either a trick, or a treat.
The treats are exactly that readers too; I’m wearing some of them in this snap.  I look ruddy scrumptious don’t I? Well, first of all you’ll see some blood-smeared on my kitty-lips, that’s courtesy of some epic lip tattoos which are a freebie from IZZIES.  The blood trickling down my throat is a gift necklace called ‘Bleed’ from the always amazing CAE, and the hair is an absolutely brilliant freebie from DAMSELFLY.  Isn’t it just to die for? This style is absolutely gorgeous; I love the fact that it features some pretty plaits to one side (perfect to show off your elven ears) and a full-bodied crown and side-swept fringe to finish.  As freebies go this one is pretty monumental and you would be foolish to miss the event, and this gift too. I paired all my freebie finds with this beautiful ERRATIC ‘Mia’ dress from THE MESH BODY ADDICTS event.  It’s available in a myriad of pattern and plain combinations, but this image just called for me to wear the black version.  I get the feeling that this dress would be incredibly lightweight in real life, very silky and slinky too, but it wears beautifully on my MAITREYA body. Of course because it’s an ERRATIC dress you just know that it’s going to have the perfect amount of detail, even though it’s a relatively simple piece.  The creasing and the slight drape and gape to the fabric feels just right and of course it looks beautiful.  I adore it.
Lots for you to enjoy here readers, so here’s your shopping list!