Well, clearly I AM! Just check out these rather dandy shorts with strap detailing from I ❤ F & CO.  for MESH BODY ADDICTS BI-MONTHLY. I really like the shape of these, they’re short with cut outs on each hip and strap embellishment that you can remove if you so wish.  Why would you though? They look super fashionable and team up perfectly with my FOXES Vintage Tied Tee from a previous LUXEBOX round.  I’m still wearing the same hair, skin and make-up as seen in my last post, but I’ve changed the colours.  This is most noticeable on the hair, where I’ve selected a dazzling shade more fitting to my attire. I told you the new TRUTH hair textures were a bit good, didn’t I? Last but not least, another MBA contribution in this pic are the ‘Lust’ nail polish appliers from ZOZ and the pose is another one that I spotted earlier from REVE OBSCURA, this one is called ‘Love and Peace’.

This month’s LUXEBOX  is really a bit of a corker.  Being on a limited budget,  I’ve had to be careful with the subscription box purchases that I make in-world ( the only one that I ABSOLUTELY must have is Powder Pack.  Oh, and Bishbox! Argh, see that’s two already!) so I haven’t purchased a Luxebox for a few months, but I’m so glad I have done this month! Why? Well, watch the videos to find out.

In Part One,  I talk about the releases from Ison, Azuchi, Foxes and Tres Blah. It’s professionally done, as all of my videos are.. ( No it isn’t, it’s an absolute farce but I care not a jot, I have so much fun doing these!) (I’ll add parts two and three once they’re uploaded!)

Here’s Part Two, where I try on Stories & Co, Teefy, Lamb and Moon’s contributions (they’re all rather fab!)

In Part Three I talk about the builds from Tarte and Scarlet Creative, and the lambs from Mish Mish that are squeeable!  I think it was a really great Luxebox this month, what did you think?

I was determined to tidy up my skybox this weekend.  By tidy I mean put away some random things with the goal of freeing up prims for the onset of THE ARCADE. TL;DR didn’t happen; instead I ended up playing around with make-up and lip appliers and dancing around with my virtual cats and basically doing anything but the tasks I’d set myself.  So at the end of it all the skybox still looks like a pigsty, there’s still a cat sat in the sink and stuff everywhere BUT I look fabulous.

And by fabulous I do mean absolutely yummy in an exciting and windsept and interesting manner. I’m still wearing my FIFTY LINDEN FRIDAY GLAM AFFAIR skin from a couple of weeks ago, but I’ve added some eyeshadow from it that I picked up at THE VINTAGE & COOL FAIR from LA BOHEME.  I wrote a few posts back about how impressed I was with this brand and that still stands..  I also rummaged around in my inventory for a lip applier that would set off the eyeshadow and found this little belter from a collection of pinks that I had in my inventory by ADORED BODYSHOP. Add some IKON eyes into the mix, along with my fave JUST MAGNETISED brows and you’re almost ready…

I say almost because hair is obviously the next logical step, and I thought I’d give my virtual roots a break after the dizzy heights of the VANITY HAIR updos that I’ve been sporting recently.  So I went simple and picked up this dandy ‘Torniquet’ hairstyle from MOON.  This was their FIFTY LINDEN FRIDAY offering this week and it just goes to show that you should never dismiss FLF for throwing up cracking items.  Some weeks it can be a little hit and miss, but never forget to check it out just in case you miss something that you’ll spend your weekend kicking yourself over.  (I speak from experience, I’ve done it many times so I now have a reminder in my phone to tell me to check out FLF, it helps!)

To finish I added a FOXES jumper (that was their contribution to August’s MIX event) and a skirt from JUST BECAUSE, a group gift that is rather smashing indeed!

And then I sat on the floor and played with my cats.  It’s a hard virtual life… 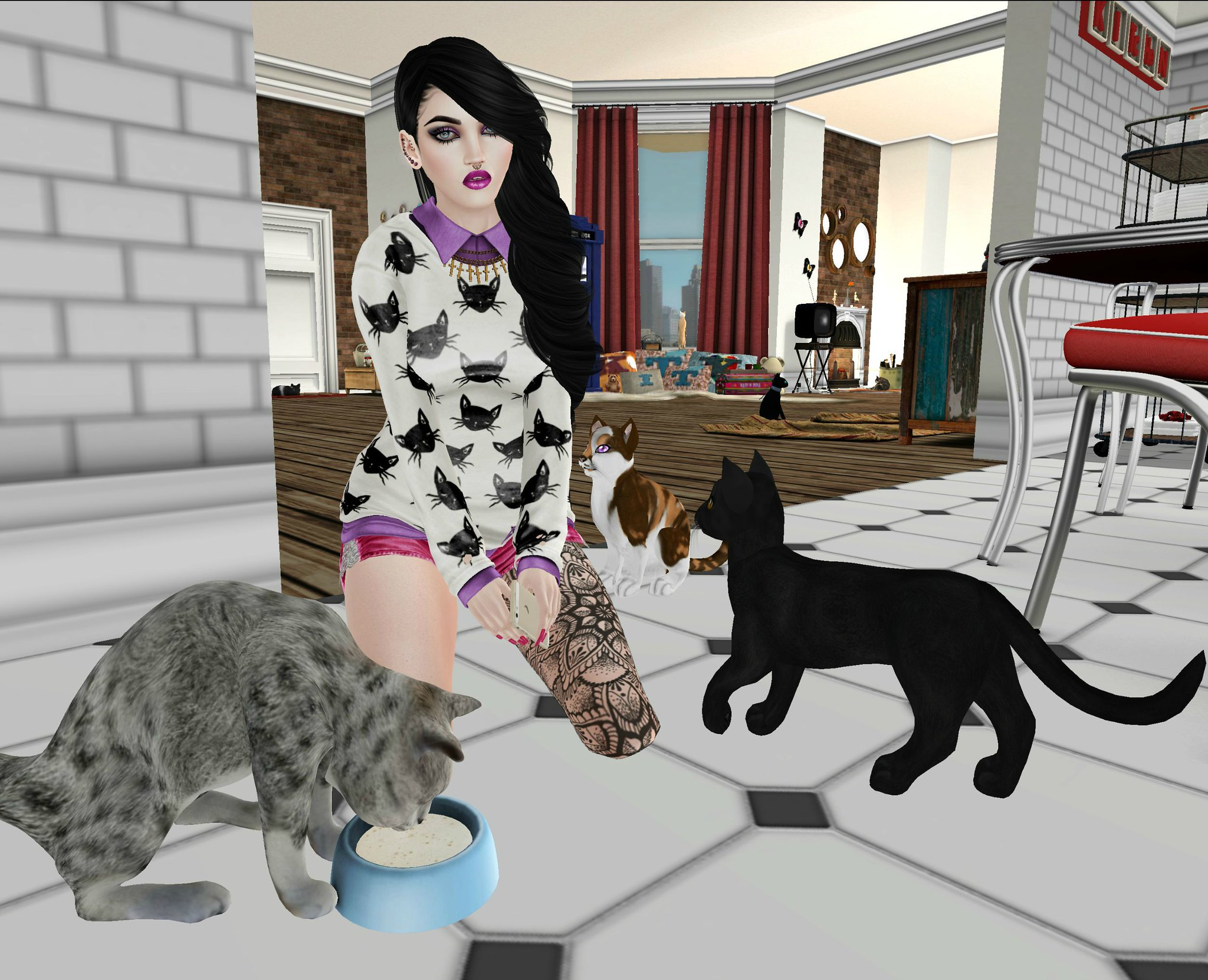 I remember one day about six years ago I was sat at my desk in RL work and was raging about how badly Amy Winehouse was being treated (yet again) by the press. It was clear that poor Amy was going through sheer hell battling her own personal demons, yet the press seemed to relish nothing more than hounding her as she seemingly self-destructed. I recall a colleague at the time saying to me in an astonished voice “You really do care what happens to her don’t you?” and the fact was yes, I did very much.

I loved Amy’s work. It wasn’t just the fact that she had a soaring voice and a vocal range that belied her young years, she also wrote lyrics  from the heart that were totally relatable to.  That said, I didn’t like her very much; she came across badly in print and on screen and it took me a while to see through how she was being represented, but once I did I understood (as well as I could) that her behaviour stemmed from the fact that she was deeply troubled.  Her drunken TV appearances and completely crazed antics were fuelled by more than drink and drugs, they were acts of utter despair and cries for help that only now we seem to recognise.  And yet either no help was offered, or for some reason it was refused.  Of course, it ended tragically and we lost someone that we should have cherished and nurtured rather than criticised and condemned.

I won’t watch the recent documentary about her, not yet anyway, although this clip gives me the shivers..

I don’t think I can bear to watch the progression of her condition and the ultimate sad outcome.  Many people scoffed when she passed that it was a certainty that she would die young, but did it really have to be so? I can’t help but think we were cheated by her death.  She was an amazing artist but she could have become so much more had she lived, and when I listen to her I sometimes feel very angry because we lost her.

For me she was at her most beautiful when she was recording the album ‘Frank’.  She had long hair, hooped earrings and an absolutely fantastic figure; she looked healthy and happy and stunningly beautiful.  Contrast that image with her in the ‘Back To Black’ video and she looks completely different; styled to within an inch of her with the melancholy beginning to really show.

But I think the most enduring image we have of Amy is of the towering semi- beehive hairstyle and the powerful black eyeliner that she sported along with Fred Perry shirts, short skirts and ballerina pumps.  That’s what I’ve been inspired to recreate here; using the outstanding hairstyle named after her from VANITY HAIR and my old favourite eyeliner from MONS.

Amy was almost ten years younger than me; she was born 14th September 1983 (I was born 13th September 1973) and since we (almost) share the same birthday I always raise a glass to her on mine, and thank her for the wonderful music she left behind.  I’ll be doing that again this year and  I’d like to think that wherever she is now she’s at peace, she recognises her own talents and finally feels the love and admiration that all her fans, myself included, continue to have for her.  RIP Amy.

SHIRT: FOXES ( I cannot find a LM for this brand?!) ‘Throw back and tied-Red’